The adverse effect of suntan lotion on corals 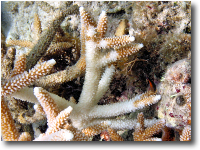 Anti-UV and corals do not mix well!

Corals are the losers of climate change affecting the planet. The studies show that the UV filters in suntan lotions activate a virus that destroys coral surface microalgae and causes coral bleaching.

Only a few microliters of sunscreen per liter of water are sufficient to start the whitening process in just 24 @ 72 hours. Imagine 4000 to 6000 tons of sunscreen are released into the sea annually by the 78 million tourists. The image on left (photos taken in Cuba) clearly shows us the effect (exposing the skeleton of calcium carbonate) of a « staghorn » coral.

On left, a healthy « Elkhorn » coral and a dead one on right (click the thumbnail to see original size). We can see the effects of time. The coral is gradually losing its color and is covered with foam to finish as a bulk inert limestone. Several reasons may explain the death of coral, a few degrees of the temperature rise of the water, decreasing pH (due to the increased level of CO2 in the atmosphere), careless tourists, boats, etc. What a pity! Because corals are home to fish, shellfish and other species.

How to combine protection against skin cancer from UV radiation from the sun and the adverse effects of sunscreen on corals ... a t-shirt! We have adopted this behavior by decreasing the amount of cream used to a minimum by wearing a long sweater.

Recently, we bought a sweater (surfboard) more technical and less burdensome than a t-shirt underwater. Company: O'Neill (92% Nylon and 8% Spandex). There are also « skin » that cover the entire body for those who do not wish to be exposed to the sun. We have seen people at Jibacoa with such a combination, light and thin.

To learn more about this topic, visit the following websites ...

Visit our websites where snorkeling is a great asset to the destination.

Copyright © 2008 destilino.com, All Rights Reserved
This is a personal site, the informations which is ensued there are simply from our experiences and appreciations as travelers and lovers of the underwater world. All our websites are non-officials and opened to general public. In spite of we did our best to share the most exact informations, we cannot be held responsible for changes, errors or omissions. No part of this website may be reproduced, modified, distributed, published, broadcast, retransmitted or circulated in any form without our prior consent.